The View From My Desk: Week 11

Here is the photo I snapped of my desk on the first day of the 11th week of the Fall term: 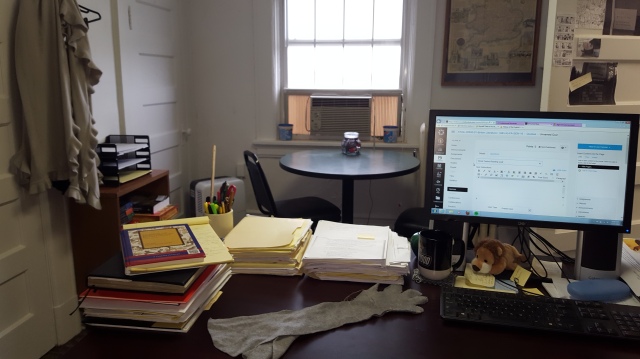 On the eleventh week of classes, my students gave to me…. five sets of essays, yippee!

Of course, that it was taken on week eleven means that this photo was snapped on Hallowe’en, which is when I began drafting this particular post for the blog. That it is now mid-December and I am only now finishing up this post should give you some indication of how busy things got directly following this snapshot. What I love about this photo is that it tells a story of my middling efforts to balance work and life during the busy months leading into the end of the Fall term.

If you look hard, you will notice that the jar on the table next to the window is full of snack-sized candy bars, which I bought on my way in this morning for my students to munch on during their individual conferences with me this week as we go over the results of their second essays. Their graded essays are the stack of papers on the right, directly next to the computer, which displays yet another assignment being entered into Canvas, our online learning platform. In front of their graded essays, you can see evidence of the Mom in me, embodied in the homemade felt gloves that my eldest daughter needs in order to complete her Hallowe’en look as “cyborg kitty,” and which I am frantically sewing away on in between conferences all day. This sudden spurt of industriousness in terms of sewing was born of sheer desperation: I spent the week prior promising to get this little project done over the weekend, but then spent the weekend assessing essays in preparation for the individual conferences I would be holding all week, and suddenly it was Monday morning, trick-or-treating was nigh, and the gloves only half-done. (The end of the story is a happy one; the gloves were ready to go by 4:00 p.m. Well, 3:50 p.m. The pre-teen was delighted with the results of her overall costume, and had a marvelous time trick-or-treating, so much so that she rewarded me with a fun size Twix bar AND a Reese’s peanut butter cup. Oh, that I always deserved such awards for parenting!)

Just to the left of the gloves, the textbook and a yellow legal pad bearing my hastily-scrawled notes for lecture in our “History of the English Language” class, which meets from 4:00-5:15 p.m. Mondays and Wednesdays, to accommodate teaching schedules for students enrolled in our education MA program. Fortunate that I managed to get those notes ready to go in time; one of these days, I fear that I will end up heading into a class session unprepared not out of laziness, but because I simply didn’t have enough time. By this point in the term we have covered theories of language and language acquisition, the systems of language, phonology and morphology, IPA, word origins and word formation, and the Indo-European origins of English; now we are focusing on Old English grammar. My students are engaged, interested, and working hard, but it’s daunting material, particularly for those who have not yet received formal training in linguistics. This course is an interesting one to teach not only in terms of subject matter, which in itself is endlessly fascinating, but because it is both introductory and mastery level, all at once: a 400-level capstone class for our English program, a 400-level required linguistics-based class for our M.Ed. in English students. Negotiating the balance between these two groups, my focus in developing the course has been on how much they actually need in terms of OE and ME grammar, versus how much will simply overwhelm them; what they need to be able to do with these materials in the classroom as general, secondary ed. teachers, how to frame these materials so that my course supports them as future educators as well as English majors. It has been a challenge, but the best kind of challenge, from a pedagogical perspective: taking a course on the books, a required course, and (hopefully) framing it so that the students aren’t simply “completing the requirement” but genuinely are getting value personally and professionally out of taking the course.  Don’t underestimate how much work it takes to reframe a lecture-based course so it is centered firmly around your students’ needs and doesn’t just cover the material–a lot of active thinking about “when will they need to know this information? When might they use this information with their students? What can knowing this material do for them in terms of their own teaching? How can they turn this material into a unit or lesson plan?” & similar goes into this course the way that I teach it–it’s almost a hybrid English/Education course. I have probably spent a minimum of fifteen hours a week just preparing for this twice-a-week class; hopefully, that preparation has paid off for my students but one thing you rarely know until well after the fact is whether or not your work as a professor has had the intended effect, impact, or influence on your students. We live in eternal hope that we are doing something right.

Back to the photo. Behind the textbook and yellow legal pad is a new stack of manila folders, one for each class. Each of these folders holds a new, uncracked-open stack of essays with accompanying reflections to assess. (Notice how I’m not writing “grade” but rather “assess”? This is a new effort on my part to reframe the concept of “grading essays”.) Technically, when I think of grading, I think of marking answers “right” or “wrong” based on an answer key or some other rubric. However, I teach my students to think of their writing not as “right” or “wrong” but as being more or less successful in terms of meeting their goals and/ or meeting required components for an assignment. I don’t want them to go through life writing for a grade, writing to “get it right,” especially when after college that is never going to happen again; for me, this is the point when they need to reframe their thinking about writing, to learn to do it towards being successful in meeting the goals of the writing, rather than in getting the grade they want, or looking for a gold star because their “grammar is good” and “it flows”. It strikes me as essentially wrong, then, to think of this work as “grading”–I’m not marking whether their essays are “right” or “wrong,” I am considering how successfully they met my standards as per the assignment sheet, how well they met their own stated goals for a piece of writing. That’s much more so “assessment” than “grading”. I have also ceased entirely to assign a numerical grade to a piece of writing, mainly because I am tired of quibbling with students about why their essay got a “78” instead of an “80” & etc. & etc.  etc., ad nauseam.

This grade haggling used to frustrate me to no end, until I realized that technically, it was my fault. I was telling them “don’t write for a grade, write to meet the goals you set,” but then I was still assigning their grades on these essays as percentages out of 100. Numerical grades tend to instill a very schoolhouse response in students. They’re writing for a number, rather than towards a goal. I’ve switched to holistic assessment for that reason– the difference between an 89% and a 90% seems arbitrary to students and, often, rightfully so (so, if there were three comma splices instead of four, would it be a 90%? How many points off for each misspelled word? How many points does a correct in-text parenthetical citation count for?) That’s not where I want their energy when it comes to writing. By switching to letter grades without numbers attached, I reframe the conversation–dependent upon the stated requirements for an assignment, to get an “A” you need an essentially flawless paper; an A- can have a few minor errors in usage if they don’t interfere with my ability to understand what you are saying; a B might include a slight organizational concern; a C might include improper citation methods here and there, and so forth–so students can focus on the overall process and product rather than fixating on, say, apostrophes. This approach, which I initiated in all of my classes this term, has thus far proven successful; I am seeing all of my students make at least some gains in improving their writing, and I’ve only had one grade complaint so far (which was resolved when we went over the assignment sheet and the student was able to see how I assessed the essay accordingly.) Hopefully, this holistic approach will lead to my students paying much more attention to what the assignment is asking them to do, rather than just writing whatever and hoping for a passing grade, by providing them with clear, comprehensible assessment guidelines that they feel they can meet, as opposed to their feeling like I am grading arbitrarily according to some mysterious points system.

December 12, postscript: This photo was snapped just before my History of the English Language class that first day of the eleventh week of classes. When that class ended, I took the gloves, left those piles of folders on the desk, and went straight home. It was Hallowe’en, and one thing I have learned is that during any given academic term, no matter how much time you spend assessing student work there is always more student work to assess, but there is only one Hallowe’en eve per year, and my children only get to trick-or-treat for a few years more. It meant a much earlier start time the next few days to get caught back up, but taking the night off to spend it wandering the streets of our new town with my family dressed in our costumes was worth it. Although it still feels wobbly and uncertain, I never feel entirely caught up, and I usually feel completely pressed for time and energy and/or guilty because someone or something is getting short shrift of my time or energy or attention, this one time, at least, I got the work-life balance right.

2 Responses to The View From My Desk: Week 11